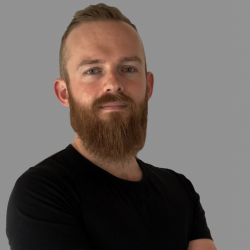 To let their work speak for itself, Daniel Hauck has not written a bio.

We made it to the "European capital for vegans" - a.k.a. Berlin. I have stolen this name from a review in Happy Cow.

But it's true, nowhere around the world I have seen so many vegan or vegetarian restaurants as I've seen only today in Berlin, and we are here now for around 8 hours.

We have been to a Italian restaurant today which only serves animal product free food, so only "fake" cheese and so on. My craving for a good pizza is satisfied for now.

Tomorrow we will visit the Veganz store and see how many of their shelves we can leave empty.

I guess we will have to come again for a whole week to try out more restaurants here.

A day off from days off, or how should I phrase it. It's now the second day on the Baltic Sea.

I am here as a tourist, but for me it's too "touristic". Nothing seams real here, everything is just built for the tourists.

The apartment is great, we had a great time, but next time we will skip the baltic sea and probably use another location for a day off.

Still we had an enjoyable day, took time for a walk around, played some board games and enjoyed some drinks.

Again a day on the road. Plus we visited the city of Lübeck. Initally the plan was only to get some waffles there.

And yes, finally we got them.

According to my girlfriend they didn't live up to the hype, but that's nearly impossible if you are craving for vegan waffles since nearly a year.

More suprising we discovered a fairly new restaurant on the way to the waffle shop. It's called "Erbse", which translates to pea. It has vegan version of all typical fast food. Like Currywurst, Döner and all the good stuff that you give up when you stop eating animal products.

I tried the curryvurst (with V). I don't like the stuff that tries to be like meat. It's good for people maybe in the beginning or that have a hard time refraining from certain dishes, but mostly it doesn't taste well. The curryvurst didn't taste like this meat replacements at all and was really tasty.

And of course we had to taste some other stuff to, I mean we are on a mission, aren't we? Here is their happy cow page.

A relaxed day. Getting up a bit later, relaxed breakfast, had a beer watched a movie and used the day to reflect.

It was quite windy outside today, so we spent most of the day inside. I started the book Personal Kanban and wrote a lot for my journal today.

The day ended with dinner at a German restaurant themed like a medival knights dinner thingy. The had a vegan burger option.

I am sitting on a ferry on the way back from Amrum, a small island in the North Sea. It takes quite a while to get there and also to get home.

So why not use the time to write...

It was a great day. We rented two bikes and discovered most of the island by it. We rested a bit on the northern point and sat in the sand, it's beautiful there.

When you are going north, or better said close to the sea you mostly expect not getting too much vegan food. Normally there is even a cafe serves vegan waffles, which my girlfriend is craving for since the start of our trip. Of course the had their rest day on Wednesday, again no waffles... If you are lucky and not visiting Amrum on a Wednesday, here is their website.

Instead we had some pasta in a small restaurant near the beach, nothing too fancy.

Here are some impressions: